All the art work was done by the artist DERIK: http://deriklovesyou.blogspot.com
Webdesign has been directed by Benjamin Gouaud.

We pledge to send all orders made ​​in the space shop website http://www.breakingfuel.net within a period of 15 days.

NEW MUSIC VIDEO #SPYCOLORS THANKS TO BARBICHETTEMAN AVAILABLE ON FB

"You do not know yet, but this band have talent to spare. Above all, they have the merit to take over some kind of disappeared rock fusion to At The Drive-In / The Mars Volta or Infectious Grooves for those who know. So we find elements of progressive, experimental rock, jazz, reggae, punk, very good on this disc, which brings change in an often monotonous musical landscape. Nothing pretentious, nothing annoying, just efficiency pop songs and intact energy." TimeOut Paris

Resulting from the many and various explorations and experiences of the members of this uncanny team, Breaking Fuel has been painting itself as a definite Rock-o-colored item !

The band, Bordelese at its roots, has taken shape around the musical humanity of its 5 members (2011), and has been “cemented” by the recording of a first EP (5 tracks), which has been handed out personnally by the band, back in 2012. Enthused by the warm welcome the EP met for its digital release, a long and successful series of concerts would soon follow (2012-2013).

This evolution led the later addition of a sound engineer to the crew.
From cosier and more intimate Appartment Sessions to larger venues (Rock School Barbey Theater / Rocher de Palmer), and not omitting the literally more “underground” bordelese scene, as well as playing for official college events, the opening of World Surf Contest (in Lacanau feat. MAWYD), or lastly, their recent booking at Barcelona’s Rock & Roll temple RazzMattaz, the band, mirroring their refreshing music has been rocking venues in an unexpected fashion.

This results in the recording of a 1st album, displaying an amazing number of collaborations on their tracks including Adrian Terrazas Gonzales on saxophone (THE MARS VOLTA, EL REGIMEN MUSIC, T.R.A.M.), Matthieu Lesenechal (Big Sir, Lisa Papineau, Bagdad Rodéo).

On the local scene, BREAKING FUEL band members are well-established as they have been and still are participating in projects such as OPA, LA Réplik, who both appear on the record. You will also be able to hear the inner workings of Camille Jamain (co-founder of the “en En veux-tu? En vl’là!” association) Organism with wich has been organizing and giving out more than 250 concerts suburbs of Paris, under the banner of Dyptique Records and VLA Records.

This album has been integrally recorded analogically at Studio des Collines (located in the Higher Perigord), allowing for Live takes. Mastering has also been undergoing the same process. It was the band’s personal request that their sound be treated the analogical way, thus capturing the team’s energy and sincerity.

BREAKING FUEL’s sound is heavily tinted with the 70’s signature sound, mixed in with more centempory flavors, inviting the listener on an epic journey !

All artwork by Derik who exhibited last year in L.A. /// Music Video by Ema Kawanago aka Barbichetteman

Come and howl at the moon with them.
Your eyes won’t believe what they hear ! 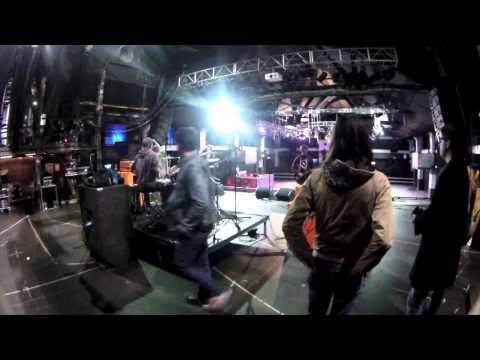